MOTHER and son arrived at the island resort in July 1993, booking a spot over three consecutive nights.

She stayed her distance quietly at the back of all the fuss, allowing her young offspring to investigate hesitantly.

The pair stayed away for the next three nights but on the fourth night, the youngster returned on his own.

He had been orphaned - alone at eight months of age.

In poor condition - no doubt in survival mode - he charged headlong into the pod of inshore bottlenose dolphins in the shallows off Moreton Island and began feeding greedily on the free baitfish on offer. 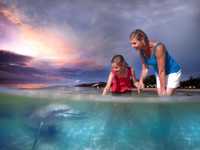 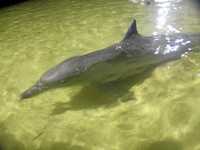 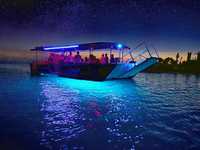 So the group's older, calmer "grandfather", which was thought to be partially blind, took the youngster under his flipper.

He cared for the little nipper and they arrived at the jetty and left together each night.

Wise Fred taught Echo how to hunt and catch his own food, which he was seen to do for the first time at age two.

Staff slowly reduced Echo's fish intake back to normal levels and he eventually became one of the fastest and best fish-catchers of the group.

Brian, who first began watching the Tangalooma dolphins as a regular holidaymaker in the late 1970s with wife Betty and their family, tells how staff had to break dolphin care protocols to feed Echo until he was satisfied, to ensure his survival.

Since the Osbornes bought the resort in December 1980, a procession of dolphin regulars has won their hearts - right from the first friendly aquatic mammal they called Beauty.

Beauty came close enough to take the first fish from Betty's hand in 1992.

That affinity between the two set in motion today's wild dolphin feeding program and care practices that are recognised among the best in the world.

Various members of the Moreton Bay pod return after sunset daily to the island jetty, showing off their dolphin antics and allowing visitors to hand-feed them.

Beauty's calves Bobo, Tinkerbell and Shadow, Tinkerbell's children Tangles, Storm and Phoenix and Shadow's children Silhouette and Zephyr have joined the unique interaction over the past 25 years.

And after dusk on a cool autumn Saturday, we are among the throng of hundreds of other wildlife lovers lining terraced seating on the well-lit jetty, ready to meet the current generation.

The dorsal fins are already clearly visible, dashing around the shallows.

Trying to count them is difficult because, of course, they won't stay still.

Then come the PA announcements.

The moment has arrived.

Orderly lines form behind each bucket spread out across the sandy beach.

Only 10-15% of the dolphins' daily intake is offered in the feeding sessions, using a type of high-fat herring.

The amount of fish is strictly weighed and distributed in buckets according to the number of people registered for the feeding so as not to surpass daily intake limits for the dolphins.

We are at the front of the first line closest to the jetty, as cormorants and pelicans keep watchful eyes on the buckets for any spilled morsel.

And we learn we will have the privilege of meeting 25-year-old Echo, now a gentle soul and favourite among visitors including tennis champion Rodger Federer, whose photo with him hangs on the wall of the nearby Marine Education and Conservation Centre.

Echo's dorsal fin makes him easily distinguishable among the pod because of the "battle scars" from a documented encounter with a shark in 1996.

The two women from the United Kingdom behind us can barely contain their excitement.

They tell us they have waited 12 months since booking to be standing here, across the other side of the world, taking up this once-in-a-lifetime opportunity.

They have only minutes more to wait.

The whole procedure is very ordered and disciplined to ensure the safety and health of the dolphins.

Staff members move down to the buckets, take out a fish and show us how it's done.

Having ensured we are wearing no sunscreen, insect repellent or moisturiser, we move to white buckets to wash our hands and lower arms in anti-bacterial wash.

Each visitor is then brought down the beach one by one to feed a fish to their particular dolphin -with resort photographers on standby to capture the moment.

As we wade into the knee-deep waters that are as clear as a swimming pool, the backlighting from the jetty makes Echo's skin shine.

He knows the drill but is not impatient.

Our guide, Paul, shows us how to hold the fish: by the tail, so the slightly spiky scales won't get caught in the dolphin's throat.

We are shown how to bend down with the fish in the water in front of the dolphin (well, they have no neck to reach up).

As he turns to his right, I swear his left eye acknowledges my wide-eyed grin.

And in that moment, my "Little Sir Echo" speaks volumes for inter-species communication.

No other "thank you" is necessary.

HUMANS and dolphins have been interacting on Moreton Island for much longer than the 20th century.

The Ngugi people - the traditional indigenous inhabitants of Moreton Island - would use their clubs to make a loud noise in the water to attract the baitfish and dolphins.

The dolphins would push the baitfish towards the shallows, as if herding them towards the men.

The Aborigines would then thank the dolphins by feeding them some of the fish.

Tangalooma is on Moreton Island, a 75-minute ferry ride from Brisbane.

Or take advantage of the new Premium Dolphin Feeding Day-Cruise. Start your day with a cruise across the Moreton Bay marine park, explore the island on your choice of either a desert safari or marine discovery tour, enjoy your choice of eco ranger experiences and then finish off by hand feeding wild dolphins. Visit http://www.tangalooma.com/

The writer was a guest of Tangalooma Island Resort.