The facility at Yamba Bowling and Recreation Club officially opened for business on Tuesday.

As the official speeches wrapped up, Yamba Bowling Club CEO Phil Boughton talked about the journey the club had been on for the past four years, and with a small pause and break in his voice, gave thanks for the support.

Then it was time for the fun to begin.

The ribbon was cut, the curtains came down, and the new Family Leisure Centre was open for business. 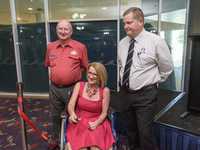 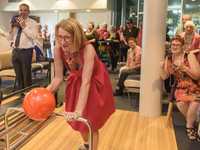 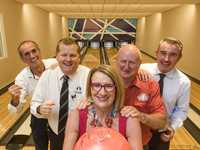 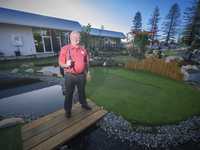 "I guess at the moment it's a little bit surreal," Mr Boughton said. "It's turned out far better than I imagined.

"The four (ten-pin bowling) lanes look spectacular, the traverse wall is great and the 18 holes of mini golf with a stream running through the middle with bunkers, it's exciting."

And eager to make sure the official opening went smoothly, staff gave the facility a quick test the night before.

"We had our staff Christmas party here last night, and the comments coming back said it was the best ever. They had a game of ten-pin and mini-golf and even climbed the traverse wall," Mr Boughton said.

"To give you an idea of the interest it's created, at this time last year we had two corporate Christmas functions, and this year between now and Christmas we've got twelve booked in, who'll all play ten-pin, golf and then have a meal in the Boardwalk Bar."

With an investment that "wouldn't leave much change from $3 million", the opening of the centre marks a four-year plan from the bowling club to create a new recreation facility for the area.

"We've created a community recreation facility for Yamba, it's something you can do at night and in poor weather."

Mr Boughton paid tribute to his staff, the board and in particular former Clarence Valley councillor Sue Hughes, who he said helped them push through some difficult times.

"There was no doubt that at one stage the development application process was so difficult that we considered not moving forward," Mr Boughton said. "But Sue came and saw me and we talked about the best solution for the community and the club."

"I saw the vision they had for the club," now Yamba Chamber of Commerce president Sue Hughes said.

"It's just amazing - to see the four lanes of bowling open, I can see it doubling in 12 months - the demand is going to be extraordinary. I really applaud the vision of Phil and the board to make this come to life."

And while Sue's first throw down the lane, alongside Member for Page Kevin Hogan, resulted in a strike, for Mr Boughton, he said the first game didn't quite go to plan.

"I've pulled a hamstring or something, but I didn't quite crack 100," he said.

"Steve Seymour our operations manager managed 140 - he was the legend on the night."