"Haven't we come a long way," was confirmed on International Women's Day by a group of women at the Nambour Museum.

An old typewriter in the museum kindled Fay's memories of her mother when she left primary school in Chillagoe to learn typing at the local convent.

"It is most likely she would have used a typewriter such as we have displayed in the museum," she said.

Audrey Adsett found much to interest her in the communications section reminiscing of how her mother operated the telephone exchange at Kenilworth.

"When I left school I would work the exchange and then I came to work in Nambour in the early 1940s at a much bigger exchange," she said.

Former nurse Ethel Humphreys came to Nambour to complete her midwifery training at the Nambour Hospital, staying on to nurse there,  and then later at Selangor Private Hospital.

"Nursing training has changed now with the current university training, but I remember when I was in the ward at a patient's side, a doctor saying to me, 'Don't read the charts, read the patient'," she said.

Throughout the day, many more stories were exchanged. 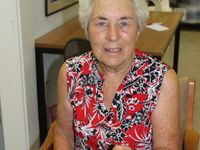