by By Yvonne Gardiner
0

At this low-key Brisbane gathering she would rub shoulders with three of Australia's own wildlife crusaders - swimming legend and Save the Bilby Fund patron Dawn Fraser, conservationist Bob Irwin and bilby fund co-founder Frank Manthey. 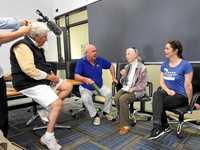 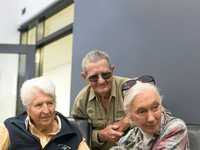 It was Frank who invited Jane to the "naming ceremony" on June 18.

Now semi-retired, Frank has been active in the cause of bilby protection and conservation since 1999.

Meeting Jane is an experience, he says, that will live with him forever.

"I was over the moon when I received word that Dr Jane Goodall accepted my offer to name a bilby after her.

"She is one of the world's leading conservationists, and will tell all the world about her namesake and how endangered they are.

"She will plead with people to help stop them from going extinct."

Jane is the founder of the worldwide Jane Goodall Institute and the Roots & Shoots program, and has worked extensively on conservation and animal welfare issues.

She is on a speaking tour of Australia.

"I've never had a bilby named after me," she told the gathering.

"It's wonderful to meet these animals that I worked so hard to help conserve.

Both Jane and Frank highlighted the urgency to recruit young people into the campaign for wildlife preservation.

Jane hoped they would be "better stewards" of the planet.

Frank says the bilby population in Australia goes "up and down depending on the seasons".

"I would like someone to ask both state and federal ministers, will they make funds available at the very first minute they receive news that another plague of long-haired plains rats has begun?

"It will be critical to deal with the feral cats that will follow the rats.

"We have always had to wait for very little funds to deal with the problem - by that time, the cats wiped out hundreds of bilbies."

Frank said he was privileged to be in the audience at Jane Goodall's talk that night in Brisbane.

"I was not expecting to see such a large crowd for a Sunday night - the show was 15 minutes late in starting because of the size of the crowd," he said.

"When Jane arrived on stage, the applause she received went for at least two minutes.

"I felt so proud when she told the crowd she was at the RSPCA and had a young bilby named after her.

"What blew me away was the number of young people aged between 20 and 35.

"I would say they made up about 70% of the audience.

"Look out, politicians, our young people want you to look after our planet and earn your salary.

Despite the challenges, Frank is encouraged by Australians' response to conservation of wildlife.

"I think the media has played a large part in making this happen, with their stories on how all governments don't seem to care whether our next generation get to see what we all take for granted, because they spend so little money on feral animal control," he said.

He said the visit from Dr Goodall meant a lot to the organisation.

"It was an honour to have Jane out there and to have along on the same day Bob Irwin, Dawn Fraser and Frank Manthey," Mark said.

"If it wasn't for Frank and his passion, there wouldn't be any bilbies.

"We've actually planted a tree at the centre and we're going to put a little sign there that commemorates Jane's visit," he said.

"She was interested in the wildlife hospital because we actually deal with more wildlife than any other organisation in the Southern Hemisphere."

"She was quite concerned by the numbers - four years ago we were dealing with about 8500 animals and birds a year, and we're now dealing with 22,500.

"You can't rehome native animals, they have to go back to the wild."

And with cars, dogs, feral animals, deforestation and disease all taking a toll on the country's wildlife, these unique animals - like the bilby - need all the help they can get from dedicated and passionate individuals.

The female bilby triplets - Jane, Daisy and Blossom - will be part of a captive breeding program.