Pilgrimage to the resting place of Van Gogh

Pilgrimage to the resting place of Van Gogh

WHAT would Vincent van Gogh think?

Surely you must wonder what the artistic virtuosity would ponder, looking down from his special section of heaven, to see the extraordinary interest in his work.

For instance, how could he even imagine that one day, long after his death in 1890, that his resting place would become a site of pilgrimage?

That was one of the burning questions that I asked myself as I visited the little French town of Auvers, where van Gogh died of a self-inflicted gunshot wound in a small rented room at a modest inn, on a shore excursion from a cruise on the luxury barge hotel, Panache.

Van Gogh spent the last 70 days of his life in Auvers, painted prolifically and, tragically, was lost to the world.

To be so immersed in the Van Gogh experience in this small unspoilt town, which probably has not changed much in the century or so since he arrived here, was one of the most significant and moving experiences in all my travels.

To walk in Van Gogh's footsteps, stand before some of the landmarks he painted, see them through my ordinary eyes and then through the eyes of his genius, was goose-bumpy stuff.

Auvers-sur-Oise, to give Auvers its full name, attracted other artists during this period, becoming a small artists' colony, but it was Van Gogh who left such a meaningful imprint and transformed the town into a drawcard for art lovers from across the globe.

Standing in front of the Mairie (town hall) to look at the pleasant but ordinary building and then look at a copy of Van Gogh's painting of the structure, so gloriously transformed by his brilliance, was a thrilling experience.

But then to wander to the town church, spy the old and dignified church, and then glimpse Van Gogh's painting on a panel in the grounds, changed my wonder to an intimate experience. 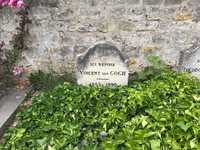 Standing in the tiny room he lived in for those 70 days, a claustrophobic space up a dark and creaky staircase in the inn, was to feel his torment through the mental illness he suffered throughout his life.

The room is now bare save a few small holes where he hung some of his paintings.

But there, printed and sitting behind a glass panel, a heart-breaking quote from a letter he sent to his brother Theo: "Some day or other I believe I will find a way to have my own exhibition in a café."

However, there would be hardly a café that could now hold those "exhibitions" and if a Van Gogh did come up for sale (this is one of those 'stranger things' moments) from a private collection it would command millions, many, many, millions of dollars.

And then there are the rest of us - lured to Auvers and galleries across the world.

Even in Australia the artist is hard to resist with the Van Gogh and the Seasons exhibition is one of the fastest selling shows in the history of the National Gallery of Victoria.

Van Gogh and the Seasons runs until July 9.