What driver tackled by truckie did to cause highway crash

What driver tackled by truckie did to cause highway crash

UPDATE: THE driver tackled by a truckie after a three-vehicle crash, north of Coffs Harbour, is today facing a string of charges.

Police will allege the man in his Hyundai sedan overtook the b-double at speed on the inside driving along the road shoulder before cutting back in front of the truck and clipping the heavy vehicle's front bumper.

This caused the Hyundai to leave the Pacific Hwy near the Sapphire Gaudron's Rd overpass and fly up an embankment and return to the roadway where the car collected a SUV driven by a woman.

In a bizarre set of circumstances, the man aged in his 40s jumped out of his car and attempted to run from the scene, before he was crash tackled by the truckie.

Police said the man suffered a seizure due a medical condition after bypassers detained him at the scene before emergency services arrived.

The man was taken to Coffs Harbour Base Hospital where mandatory drug and alcohol tests were taken.

Police said the male driver is today facing charges over the incident.

Officers have assessed dash cam vision taken from inside the truck to substantiate witness reports surrounding the three vehicle crash.

Police say its believed the Hyundai may have been travelling at speeds of around 150kmh prior to the crash.

That dual carriageway section of highway is signposted 110kmh. 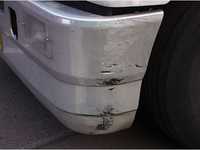 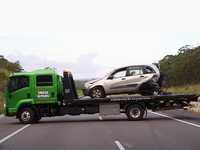 TUESDAY 8.30PM: A B-DOUBLE truck driver is said to have tackled a motorist who attempted to flee the scene of an accident on the Pacific Highway.

The incident happened 5km north of Coffs Harbour on Tuesday around 7pm when a Hyundai struck the front bumper of a Mack prime mover that was towing trailers then headed up an embankment and crashed heavily into a SUV in another lane.

The  crash happened at speed in a 110kmh zone of the highway.

At the scene, the truck driver explained how the car hit his truck, then lost control and drove up an embankment under an overpass before collecting the other vehicle which was driven by a woman.

The truck driver, who didn't want to be named, said as he pulled up his rig he watched as the male driver ran from his car up a roadside embankment.

After getting 'a thumbs up' from the female driver of the SUV to indicate she was okay the truckie told police he gave chase running up the hill after the fleeing driver.

Drawing close enough to the man the truckie said he pounced tackling him on a nearby off-ramp roundabout.

It is understood police arrived on scene moments later to find the man detained by passers-by.

As officers got a handle on the situation and what had happened, the man, believed to be aged in his 40s, began having seizures and reports from the scene indicated he blacked out for a short time.

Ambulance paramedics treated the man for about 20 minutes as well as the woman who was driving the third vehicle.

Both patients were transported to Coffs Harbour Base Hospital for assessment.

North bound lanes of the Pacific Highway were closed for a brief period and police diverted traffic as the lanes were cleared.

Police say officers are tonight hoping to view dashcam video from the truck.