THOUSANDS of residents have been flooding through the gates of the Sunshine Coast Agricultural Show today, including the Prime Minister himself.

The sunny weather, combined with the decision to lower ticket prices to $10 for adults, $5 for children aged 5 to 10 years and allow children under 5 to enter for free, has been rewarded with impressive numbers attending as the show celebrates its 111th year.

The festivities were somewhat overshadowed earlier in the day, however, when Prime Minister Malcolm Turnbull attended earlier today for a meet and greet and press conference.

Show bags have proved popular once again at the annual agricultural show, while today's entertainment has included the customary beef and cattle judging, horse events, show jumping and wood chopping.

The Grand Parade will be held this afternoon from 2.30pm in the main arena, followed by the Young Farmers Challenge.

Other highlights of the day include the popular mini racing pigs, fashion competitions and parades, cooking demonstrations and a night-time fireworks and laser spectacular that promises to 'wow' show patrons. 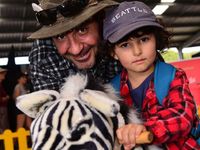 When: Until Sunday, 8am until 'late' each day.