ALMOST a year after Samsung recalled its flagship Galaxy Note 7, the burning question remains. Why stick with a name which has become synonymous with exploding phones?

Samsung says the answer is quite simple, it remains just as committed to its premium phone as its customers.

According to the Korean tech giant, 85% of Note owners reported loving their phone with 75% calling it the best phone they had ever owned.

"That is such a sign of love and we want to return the love back,'' one official told journalists in a briefing ahead of the launch of the Galaxy Note 8 model in New York.

The Note has been at the forefront of innovation, starting with the AMOLED display in 2008, S Pen in 2011, water and dust resistance in 2013, wireless charging in 2015 and infinity display this year.

With a new square curved design, it sports a 6.3 inch quad HD and super AMOLED display for mobile HDR content, yet at 74.8mm wide, can still be held in one hand.

Samsung knows the excitement around the release, describing it as bigger than this week's total solar eclipse which
produced some images not dissimilar to rival Apple's logo.

The tech leader is certainly hoping its Note 8 will take a healthy bite out of the high end market, particularly given the innovation around its new cameras, which it describes as world-first technology.

Garry McGregor, Director, IT and Mobile, Samsung Electronics Australia, says the Note 8 builds on the features that Samsung has pioneered, including biometric security, fast and wireless charging and a 'beautiful handwriting experience'.

"The Note 8 is the most powerful and refined device we have ever launched,'' he says.

You can expect Samsung will spend a small fortune on marketing the device given its role in rebuilding its reputation.

First looks for the Note 8 look very promising. It's a big phone with big features and McGregor is genuinely excited about what it has to offer.

"Through a combination of features synonymous with a Samsung Note device, like the S Pen and infinity display, the Note 8 will give Australians the ability to do far more with their device."

Does Samsung Galaxy Note 8 have the best camera now?

Samsung believes the number one selling point of its Note 8 will be its dual camera system - the first to feature optical image stabilisation for both the wide-angle and telephoto lens.

In our brief testing, ahead of the launch, the two 12MP rear cameras captured super sharp high resolution images with bokeh effect (blurred background) to rival a DSLR and Apple's iPhone 7 Plus.

The Galaxy Note 8's Live Focus even lets you control the depth of field by allowing you to adjust the bokeh effect in preview mode and after you take the photo.

In Dual Capture mode, both rear cameras take two pictures simultaneously and allow you to save both images; one close-up shot from the telephoto lens and one wide-angle shot that shows the entire background.

Samsung says the wide-angle lens has a dual pixel sensor with rapid auto focus, so you can capture sharper, clearer shots in low-light environments.

On the work side of things, the new Note 8 some big improvements to its functionality, including the ability to pair applications and launch them in multiple windows with the click of one icon on the edge display.

For example, you could launch your Maps app and choose music for the journey or open a video while chatting with friends or colleagues about it in the screen below.

Both the S Pen and the phone have water and dust resistance (IP684) and you can even write on the phone when it is wet.

What security features does the Galaxy Note 8 have?

For security, the Note 8 will offer iris and fingerprint scanning, defence-grade protection through Samsung Knox 6 and a secure folder to keep your personal and professional data separate.

With 6GB RAM, a 10nm processor and expandable memory of 256GB, it is a phone that, when coupled with Samsung's DeX dock, keyboard, and monitor, could make you question whether you even need a laptop.

For Australians, Samsung's Bixby voice activation interface, the rival to Apple's Siri, promises to make getting things done a whole lot easier. The artificial intelligence system learns from you the more you use it.

When it comes to the S Pen, the functionality of Screen off memo taking (where you don't even have to launch an app to take notes), has been expanded from one page to up to 100.

So what about the Note 8 battery then?

And as for that exploding battery issue, Samsung says it will continue to commit to industry-leading safety initiatives.

The new smaller 3300mAh battery is more efficient that the larger 3500mAh version which came with Note 7.

And as you would expect, it has undergone exhaustive testing, including Samsung's rigorous 8-point safety process.

After all, the last thing the company - or Note fans for that matter - want is a repeat of last year's disastrous recall.

Samsung is hoping (probably praying as well) that the Note brand will again be remembered for big innovations rather than advances in combustion technology.

With a price tag of almost $1500 in Australia, it would want to.

• The writer has travelled to New York as a guest of Samsung Australia for the launch of the Galaxy Note 8. 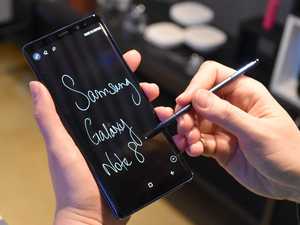