Rodney, 70, said his son spotted the caravan competition online and sent an email off to Seniors Newspapers to request a sticker after telling him it would be the perfect prize for he and Jenny to try for.

When the sticker arrived in Windsor, NSW, where the family has lived for all of Rodney's life, its Retired Not Expired slogan struck a chord.

"We've retired alright, but we've not had it yet," Rodney said.

The couple's three sons have a small farm at Pitt Town where the grandkids go to ride their bikes and get away from it all - and it was there that the creative spark arrived for the photo.

Rodney, who often visits the farm to mow the lawns for the kids, said one son had come across a life-size bull statue some years ago which had pride of place in the paddock, while the other had found a big black panther that adorned the roof of the farm.

"We were walking past and my son said to his mother, jump on that bull," Rodney said.

"She told him she'd never be able to get up on it and he went and got her a ladder. Old Mother climbed up the ladder and I pretended to be getting chased over the fence.

"It was funny. We were having a scream of a laugh about it." 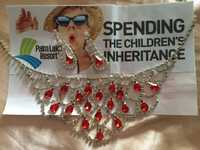 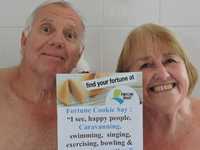 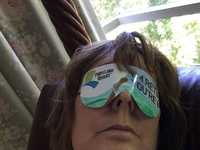 Rodney said in 70 years they'd never won anything of note until now.

"You cannot believe how pleased we are."

"It's come at a perfect time for us. We just need to be able to get away and relax."

Mr Lang said it was a great photograph that really captured the spirit of the Retired Not Expired motto.

He said it was wonderful to see the prize going to such a deserving family.

Mr Crockett agreed saying the judging process had been a lot of fun and generated lots of laughs and plenty of challenges.

He congratulated all of the entrants on their efforts and wished the Simmons happy travels with their new van.

The Win a $69,990 Majestic Caravan Giveaway competition opened in August this year and has been a partnership between Palm Lake Resort and Seniors Newspapers.