MAKING the plea for public information, a retired truck driver from Ballina has described the vandalism of his retro van as gut wrenching.

Tony Baker, 60, discovered the 1988 Viscount Ambassador he lovingly refurbished after rescuing it from a paddock six year ago, coated in graffiti on Tuesday morning.

Returning home after two week trip from Noosa, Mr Baker and his wife found the car at 7.45am, covered in bright yellow spray paint.

Mr Baker claimed vandals targeted a two square metre Australian flag he hand-painted on the front of the vehicle with particular malice.

"They've just gone around it with a can of yellow paint, just crazy, all over the white," Mr Baker said.

"There was an Australian flag on the front I painted, being an old proud aussie, and it was all painted over with yellow.

"It was as though they did it out of disgust, it's like they thought the Australian flag shouldn't be there."

An Australian themed beach surf mural on one side of the van, painted by Mr Baker's now passed away friend was also destroyed. 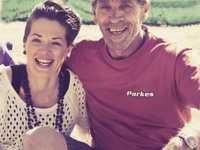 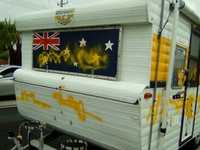 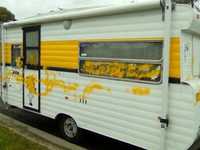 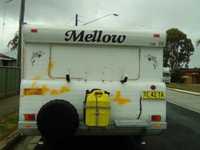 "This van was an special, rare old thing, a lot of love and care went into it and were distraught when we found it. We were actually gutted.

"I don't know what happened to people's respect for property."

Mr Baker said those responsible should be ashamed of themselves and called on anyone with information to report to Crime Stoppers.

"This sort of disrespectful behaviour makes the town look yuck, it gives the town a bad name and a bad attitude," he said.

"But it doesn't have to be like that. We love this town ... a little bit of pride in your town doesn't go astray."