Why everyone is suddenly talking about tai chi

Why everyone is suddenly talking about tai chi

THERE'S a new craze getting Grafton residents out of bed and enjoying the fresh air every Friday morning.

Tai chi is a slow-moving martial art more often associated with groups of older people in metropolitan parks - until now.

Tai chi has been taking place for a month now at 7.15am every Friday morning at Grafton High School.

The free half-hour classes are run by Ciata Cooper from Grafton Physio + Sport, who is a qualified instructor in Yang style tai chi.

So why is it free?

"Partly to give back to the community and say thank you for your support," Ms Cooper said.

"Also accessibility, so it doesn't create any barriers and anyone can come along. I think that's really important.

"I didn't expect to get this many people. The response has been great."

The classes are usually held on the school's oval (grass maintenance meant this week's class moved to the quadrangle) and have been attracting about 40 participants each week. 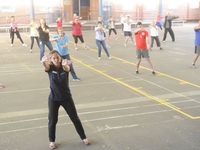 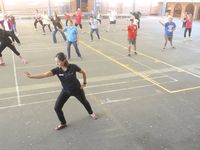 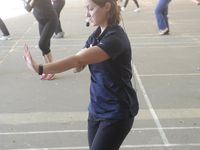 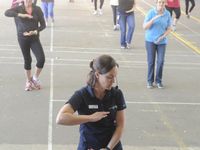 So why tai chi?

Justine McClymont has been attending every week and said it was a great way to start the day.

"It's so lovely to have free tai chi right in the middle of town," the Grafton resident said before the class.

"I love being outdoors early in the morning and doing these beautiful, gentle, relaxing movements."

Amanda Ryder is one of three workmates who all decided to try it out.

"It's fun and a good thing to do first thing in the morning to get you ready for the day," Mrs Ryder said.

As Ms Cooper starts the class, she explains to the mostly beginner crowd not to expect to hear her voice as much as you would expect from a gym class.

"The main reason is tai chi is about connecting to your own body and mind and being in your own space," she said.

The physiotherapist's passion for tai chi stemmed from her keen interest in working alongside the elderly.

"We know about 25 per cent of the population over 65 has a fall each year. So what I was looking for was something that is evidenced based to try and help curb that problem.

"Tai chi was the thing and I guess I fell in love with it more than I thought I would and really became quite passionate about it."