THERE'S a silent killer lurking in one of the nation's most important natural assets and we are giving you the first indepth look at its trail of wanton destruction.

These shocking views brought two environmentalists to tears as they counted the cost of damage caused by bleaching to just one section of the Great Barrier Reef.

James Cook University PhD student Laura Richardson and The Ocean Agency founder Richard Vevers were shocked to the core while they were surveying destruction around Lizard Island in April and May.

The Island  is considered the ground zero of the epidemic.

The bleaching, caused by a warm water induced release of a slime-like algae from the corals, has left behind a wasteland void of all colour and marine life.

The Great Barrier Reef Marine Park Authority believes 22% of the entire reef is dead or dying and 85% of that destruction can be found in the far north region from the tip of Cape York to just north of Lizard Island.

CHECK OUT THE 360 DEGREE VISION BELOW

Releasing her dramatic damage photographs on Tuesday, Ms Richardson said she was devastated when she first saw the dark and rotten remains of the reef.

"The first dive I did on this recent trip brought tears to my eyes," she said.

"It was hard not to be emotionally affected by what we saw.

"So many corals were already dead with turf-algae growing over the skeletons that remain.

"Just a few months ago, these reefs were characterised by live, healthy, colourful corals and fish.

"Now many of the reefs are unrecognisable."

Mr Vevers said the bleaching was one of the "disgusting sights" he's seen or smelt.

"We normally photograph reefs at the height of bleaching and they usually look stunning at this stage even though they are often dying," he said.

"This time, however we were a few weeks after the bleaching and it was one of the most disgusting sights I've ever seen," Mr Vevers said.

"The hard corals were dead and covered in algae, looking like they've been dead for years.

"The soft corals were still dying and the flesh of the animals was decomposing and dripping off the reef structure.

"I can't even tell you how bad I smelt after the dive - the smell of millions of rotting animals," he said. 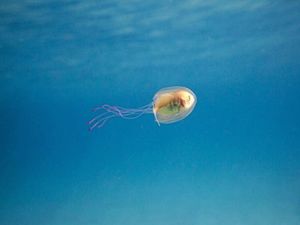 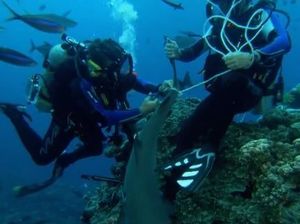 Fancy an underwater rodeo with a shark?