A piece of Clarence Valley heritage up for grabs

A piece of Clarence Valley heritage up for grabs

FROM the outside it's an impressive sight. Ravenwood, built in the 1880s, captures the majestic history of Grafton. And this piece of Clarence Valley heritage is up for grabs.

Centrally located at 36 Villiers St, the two-storey weatherboard home is well known to anyone familiar with Grafton.

But while the property has already attracted a lot of interest, last Saturday the four bedroom home listed at $498,000 through McKimms Real Estate was passed it at auction.

"There's not too many others like it. You don't really realise there's not a lot of older Federation houses that are two storey in Grafton, which is odd for a place that floods a lot."

The property has now gone to a private treaty sale and is open for inspection from 9am to 9.30am this Saturday (Feb 25). 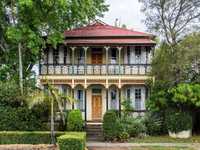 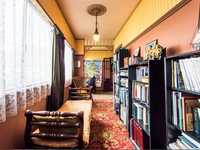 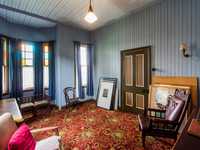 It is the first time Ravenford has been on the market in more than 20 years, and it's history, as described on the McKimms website, is as fascinating as the frontier town itself.

"Historians have concluded that the original house was owned and built by Captain George Greenaway - a well known mariner who commanded the river steamers "Collector" and "Favourite" that worked the busy Clarence River in the late 19th century.

"It is assumed the original house was constructed c. 1880 as a single storey but grand residence for a prominent Graftonian approaching retirement.

"The central address was adjacent, in those days, to the TE Henson & Sons Cordial Factory (now a part of TAFE) and the second owner of 'Ravenford' was WH Henson who purchased the deceased estate in 1898 and by 1900 had converted it to an even grander two storey residence with bay windows.

"The same external design - more or less - stands to this day."

"The house is both Heritage (local) and National Trust (national) listed and listed also with the Society of Architects (national) in their list of most significant buildings in Australia."

Steeped in history, even the bangalow palms in the backyard get their own mention in the National Trust listing.

Check out the listing online or contact McKimms on 6642 1811 for more information.