OVER several months, the lives of the elderly and near-homeless Mary* and her little, fluffy dog were turned around through the work of volunteer veterinarians working in a park in Frankston, Melbourne.

Each month she bought her companion to the park for treatment and advice by the charity group Pets in the Park.

The vets helped the little dog back to good health by clipping its overgrown nails treating both ear and skin infections. 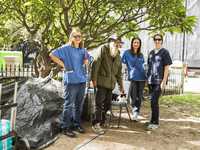 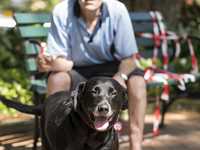 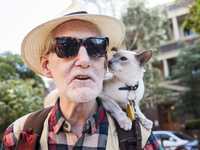 "She was so grateful for the support we gave her," PITP's director Dr Mark Kelman said.

"She saw her dog walk better and its ears treated. Those simple things made such a difference.

"Talking to her at the event she brightened up. It's really what we are there for; it's not just the pets, we help the people as well.

"One of the reasons we run these events monthly is there is a lot of camaraderie and community as a result of people getting together.

"Partly it's about helping people realise there are there who want to help and love them as well."

PITP started in a Parramatta park in Sydney in 2009 by Dr Mark Westman.

Since then PIIP has recruited volunteer veterinary specialists and supporters in Sydney city, central Melbourne and Frankston, Brisbane and Canberra, with more locations to start clinics in the next six months.

Dr Kelman said they deal with a mix of people, "which certainly reflects what's going on in society".

"We definitely have a population of senior people who are in need of our help, and those people are either homeless or at risk of homelessness," he added.

The volunteers offer full veterinary services at the pop-up clinics in parks, with an undercover area to cater for cats.

"In a lot of cases, if they didn't have us, they would spend every last dollar they have on their pet and then leave little to look after themselves," Dr Kelman added.

"That's why this service is so important as we are trying to give them a hand so they can live a bit easier and hopefully help them get out the situation they are in if that's what they want to do."

All services are free and funded purely by donations.

For more details of Pets in the Park and to support their work, go to www.petsinthepark.org.au.

*Not her real name.