Nikon Coolpix P900: One hell of a zoom lens

Nikon Coolpix P900: One hell of a zoom lens

Mark Furler Group Digital Editor Mark Furler is News Regional Media's group digital editor. He’s an award-winning journalist who has lived and worked on Queensland’s Sunshine Coast for more than 30 years. He’s passionate about fighting for a better go for locals. His awards include Editor of the Year, and involvement in three PANPA Newspaper of the Year wins for the Sunshine Coast Daily. He has also been involved in INMA and News awards wins for excellence in digital coverage.
Full Profile
0

It's the only way to describe the zoom power of  Nikon Coolpix P900.

This is an 83 times optimal zoom.

To put it in perspective, a sports photographer at a major game, using an DSLR, might have a 200-600mm lens.

While obviously the P900 doesn't have the speed or capturing power of a high end DSLR, for the average punter it's a hell of a camera.

We put it to the test shooting surfers on low light.

Start zooming and you soon see the appeal of this Nikon.

I posted a series of photos of surfers with the backdrop of an island behind them.

The island was a kilometre away.

In the shots, it looks like the surfers could almost step off the wave onto the island. Surfing and photographer mates alike were impressed.

What was particularly amazing was the focusing power of the camera.

Even with a lot of movement, plenty of zoom, and a fair distance between the camera and the subject, most of my images were pretty sharp. 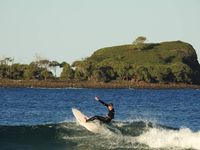 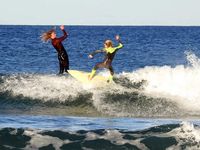 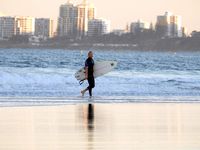 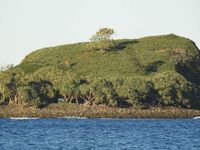 The P900 uses a new dual detect optical vibration reduction feature which stabilises shows at a shutter speed of about 5 stops and twice as fast.

Picking it up, you notice that it is a heavier camera than most consumer compacts.

It feels more the weight of a basic DSLR with an 18-50mm lens.

Once you zoom the lens right out, it almost feels a little lopsided to hold but it has a decent grip system and you get used to it pretty quickly.

There is also a side zoom control designed to minimise camera shake.

The imagery is consistently clear and colours vivid.

The lag time between shots is about 0.12 seconds at wide angles and 0.75 seconds in the telephoto position.

the super long lens which extends to a staggering 4000mm when using the dynamic fine zoom.

The 900 has a 921k-dot 3-inch vari-angle TFT LCD monitor, giving you the flexibility to capture high or low angle shots. 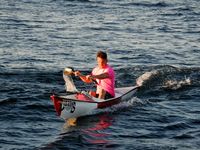 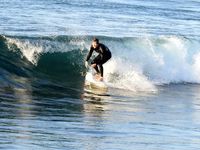 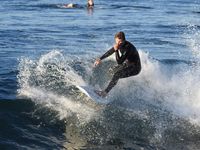 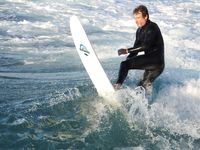 There's also an electronic viewfinder with a built-in eye sensor which detects your eye and automatically switches from monitor shooting to viewfinder shooting.

You can connect your camera to your phone or tablet device with built-in Wi-Fi and NFC by downloading the free Wireless Mobile Utility app,  either for iOS or Android devices.

When connected, you can use your smart device to trigger the P900 remotely, as well as pre-select images for transfer once you're connected via Wi-Fi.

You can also track detailed location information such as longitude, latitude and distance between buildings or landmarks at higher speeds and accuracy with GPS, GLONASS, and QZSS support.

In the video department, the P900 allows you to create full HD movies by shooting in 1080/60p with stereo sound.

The P900 comes with a zoom microphone that changes directivity according to where you are zooming.

With pricing at around $700, this is definitely a camera to add to the Christmas wish list.