Natural beauty at its very best in Iceland

Natural beauty at its very best in Iceland

ICELAND'S majestic landscapes is one for the travel bucket list with stunning natural backdrops to deep history and welcoming communities.

There is time to save up for the Viking Ocean Cruises tour which is scheduled for four departure dates in 2019, but if you want to take advantage of a super discount of $1000 per couple, you will need to book one of these tours by December 31, 2017. 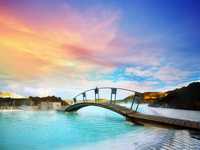 The tour starts with two days in Norway's ancient city of Bergen. From there the cruise travels to Flam's Aurlandsfjord, and onto the urban wonders of Alesund and natural wonders of Geiranger before heading across the North Sea to Faroe Island of Torshavn with its mountains and fjords, and fabulous Viking history.

On day eight it's time to cross the Norwegian Sea to Iceland's Seydisfjördur which was founded by Vikings. From there the tour goes to northern town of Akureyri and Isafjordur before arriving in the world's most northernmost capital city Reykjavik which is known as one of the world's most eco-friendly communities.

Along the way travellers will meet the people who thrive on the water's edge of the Faroe archipelago, and encounter polar fox, tern, eider ducks and members of the whale family in Iceland's majestic, distant north.

For more information on this and other Viking Ocean Cruises, go to www.vikingcruises.com.au.