FORMER Grafton resident Greg Smith left the Jacaranda city in 1979 and now lives in Ipswich, but his Clarence Valley roots keep turning up to haunt him.

Late last year, he and brother Les were going through some of his parents' belongings in Brisbane when they stumbled across box of 25 glass negatives and an old Kodak Eastman camera, still wrapped in a 1980s edition of The Daily Examiner.

"We sort of re-discovered them," Greg said. "I knew of their existence, but until we found them last year I'd never had a good look at them."

The source of what he found, pictures of his grandparents Cecil and Eva Smith, who lived in Turf St, Grafton, as well as landmarks around Maclean, are still a mystery to him. 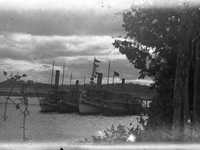 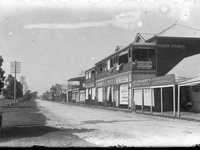 "My grandfather was a fisherman, and because of that he was known as Poddy," Greg said. "I can't remember him being interested in photography, but it might have been something he did when he was younger."

He said the camera found with the negatives was better than the Box Brownies people used to take snapshots.

"From research on the internet it was a model made after 1910. It's still in magnificent condition," he said.

Greg said from the Red Cross uniform his grandmother was wearing, he estimates the photos were taken during the First World War years, 1914-18.

"Pop must have taken these photos and had someone take the photos of him and my grandmother. "I'm not sure why all the pictures are taken around Maclean. It looks like the photos were all taken on the same day.

"Some of the people who know the area say most of them must have been taken near the Maclean Court House."

He was so intrigued by the negatives he took them to a photography specialist in Brisbane and had high resolution scans taken from them.

"I've offered copies of the photos to the Maclean Historical Society and someone has suggested the NSW State Library as well," he said.

He has put the photographs on the Clarence Valley Past and Present Facebook page.

"It's been really good to read all the comments," he said. "It's rewarding so many people have enjoyed looking at them."