LIONS, tigers and bears - oh my!

Australian scientist and filmmaker Chadden Hunter followed his own yellow brick road to India and encountered all three of these top predators, and had close calls with two of them, during his work on Planet Earth II - the acclaimed sequel to David Attenborough's seminal Planet Earth series.

Chadden certainly wasn't in Oz any more as he walked through India's Kaziranga National Park, home to the tallest grass on the planet, which can grow up to half a metre in a day, unsure if a tiger or rhinoceros was just metres away.

"Kaziranga has the dubious honour of being the world's most dangerous national park," he tells Weekend.

"It has this really dense, impenetrable grass which is like seeing a wall of sugar cane. You have to go in on foot, and as you push through you can't tell if you're close to rhinos or tigers or elephants or black mambas. The list of animals that could kill you in this grass just goes on and on. You can't see them and they can't see you."

And the Arctic tundra is about as far away as he could get from his native Far North Queensland. He can laugh about it now, but one encounter with a bear was so "unnerving'' that Chadden recorded a farewell video to his family in case he was attacked.

"I was out in the tundra on my own and I saw this massive male grizzly bear on the horizon," he says.

"Our camp manager said 'If you encounter a bear don't run'. I had my bear safety gun, and some bear spray if it really got desperate. He started making his way towards me, and I think we underestimate how fast they move.

"I held my camera to film over my shoulder so I could watch the bear while I walked back to camp. I recorded a message for my fiance and loved ones if worse came to worse. I did make it back to camp before the bear, but the bear did tear at our camp door. It was a bit unnerving."

So how does a Mount Isa-born scientist end up working for David Attenborough?

After studying marine biology at the University of Queensland and doing his masters degree on bower birds, Chadden was working on his PhD on gelada baboons, through Liverpool University, in Ethiopia when he first crossed paths with SirDavid.

His research on the baboons and his work with the local community, who nicknamed him "monkey man', featured in a documentary narrated and presented by the famous naturalist.

After several years cutting his teeth on documentaries for National Geographic and the Discovery Channel, Chadden got the call-up to work on the BBC's ground-breaking series Frozen Planet. He's been in television ever since, working as a field assistant on Planet Earth and as a producer of the Emmy-nominated Wild Arabia.

"I've been lucky to work with David on and off for the past 15 years," he says. "I've worked more with David than not with David in my filmmaking career; he's an inspiration for all of us.

"I always wanted to find a way to share my love of nature with a wider audience. I thought I was going to be a biology teacher for a while, but when I discovered the power of television and how I could reach millions with my films - that was a real epiphany."

As one of six episode producers on Planet Earth II, Chadden spent three and a half years exploring grassland habitats around the world. It wasn't a habitat he'd specialised in before signing on to the series. Instead, the 44-year-old wanted a challenge.

"I grew up in Cairns and I did my masters on bower birds out of Brisbane, so I've done my fair share of rainforest and I know how hard they are to work on," he says.

"Then I worked a lot in the mountains on Planet Earth (as well as other documentaries).

"Grasslands just happened to be a habitat I didn't know as well. For self-development and seeing species new to me, it was a habitat I really fought for. It's a habitat a lot of people think they know well; they think they'll see a cheetah chasing an antelope across the savanna. It was my job to put a fresh spin on the habitat and that offered some real creative challenges."

While there are plenty of big, majestic animals in Chadden's grasslands episode - including lions that specialise in hunting in the swamps of the Okavango Delta and the iconic bison of America's Yellowstone National Park - it's the humble harvest mouse that nearly steals the show.

A decade on from Planet Earth, which was the first nature documentary shot in HD, Planet Earth II uses the latest in camera technology to give viewers an intimate portrait of animal and planet life in stunning 4K.

With a camera lens just inches from the tiny mice, their summer meadowland in the Norfolk countryside appears super-sized.

Wild flowers are more like massive trees from the mouse's perspective, and a patrolling barn owl is positively terrifying.

Compared to his other filming locations, Norfolk is just a hop, skip and jump from Bristol, where Chadden is based with the BBC's renowned Natural History Unit.

Chadden has spent much of his adult life living overseas; his Aussie drawl has been replaced with a hint of a British accent. But, as the song goes, he still calls Australia home.

"I wasn't going to not find an Aussie story to do," he says.

"We have a lot of quite intimate stories (on Planet Earth II) because we're going for an immersive look. We want to take you in the footsteps with the animals, but every now and then I wanted to revisit the landscape and give people that sense of awe.

"What those termite mounds do is create this landscape like something from another planet. They are these immense, 3m-tall mounds that all line up north-south because of thermoregulation.

"When you fly a drone over them it feels like the surface of another planet. I liked that there was an Aussie landscape that tapped into that sense of awe and wonder."

As Planet Earth II continues to air on our screens, Chadden is already hard at work on Attenborough's next epic series tentatively titled Seven Worlds.

"It's a seven-part series about the continents, with one episode per continent," he says.

"I happen to be producing the North and South America episodes, so it's a chance to get into the parts of the world I haven't seen much. I just got back from Ecuador, and I'll be filming on and off for the next two years.

"I like taking the time to really get these things right. On the big Attenborough series you get the time to really work on the script and music. I like the perfection of these long series even though you don't get to put much on your CV."

With a name like Attenborough as a reference on his resume, I doubt Chadden will have a hard time finding work ever again. 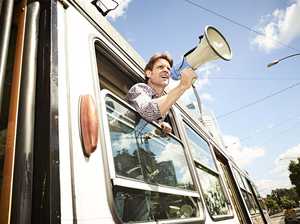 The Chaser's Craig Reucassel is at war with waste 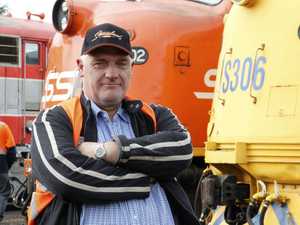