Living off the grid: How this couple lives with less

Living off the grid: How this couple lives with less

Just look at Luke Mathews and Harmony Larkin, living on a 30 acre Finch Hatton property where they grow most of their food, pump water from a nearby creek and operate on solar power.

Far from any "Into the Wild" notion that living sustainably means severing ties with the rest of the world, Luke explains that being part of a community is a key component of their lifestyle.

"Sustainability really is a lot easier on a community level that an individual level," Luke said.

That's because permaculture, the 'design system for human settlement' the couple lives by, is based on abundance, bartering and trading.

So when Luke grows too many pumpkins for the couple to consume themselves they trade the excess with other likeminded people, or put it back on the garden as mulch.

RELATED: Three ways you can live a more sustainable life

And it's the fact there is always excess, just from the garden Luke and Harmony grow themselves, that has Luke wary of any claims a growing human population will lead to food scarcity in the future.

But he did describe many practices involved with the production of food these days as "psychopathic", like freighting food grown in Bowen to a wholesale market in Brisbane only to truck it back up to a retailer in Mackay, and believed agriculture needed to move back to the laws of nature. 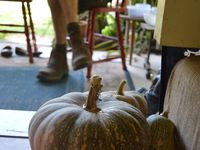 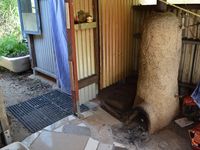 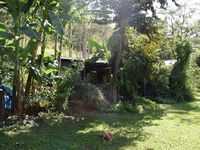 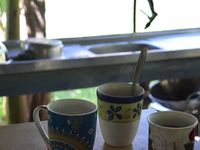 Although permaculture was about growing food with little input as it suited the climate and letting the garden "go with the flow", Luke said he spent as many hours as possible there.

"You get out of life what you put into it," he said.

"When you're planting your hands and knees are sitting in the soil. It's like every product has a little blessing before it goes in.

Luke first discovered permaculture in the '90s, after growing up in Melbourne's eastern suburbs and working as a landscape gardener and in Landcare.

He said the introduction immediately saw "his whole life clunk into place" as it validated the beliefs he had always held.

"It gave me permission to keep going down that path and made me realise I wasn't a complete oddball," he said, with a laugh.

The pair met at the community gardens in Mackay and have been together five years, and have grown their smorgasbord of a garden, including macadamia trees, mango trees, guava, spinach, herbs, bananas and pigeon peas for two years.

But permaculture was not solely about growing food.

The couple has solar power at their home, which primarily ran a chest freezer for eight hours a day.

That was enough time to produce ice, which they then put inside a fridge which was not switched on.

Water was pumped from the creek and heated by fire.

And while wheat wasn't grown in the garden, Harmony ground up dried green bananas as a substitute for flour.

They even grew about 20 coffee trees, enough for a cup each day.

"We can even sit down in the creek on a lilo with wifi connected for the laptop. And we can sit there on the laptop while watching a platypus," Luke said.

But he said occasionally, the couple still went to the supermarket and had fish and chips for dinner.

"We might get one bag from the supermarket once a week," he said.

"And instead of getting fish and chips in a polystyrene container, I will ask for a paper bag."