Goomeri Pumpkin Festival a sweet treat for the family

Goomeri Pumpkin Festival a sweet treat for the family

THE Goomeri Pumpkin Festival has some of its most passion pumpkin competitors in the Pumpkings.

The Brisbane contingent takes the trip to Goomeri every year to compete in its diverse range of competitions all centred on the mighty pumpkin.

Pumpkings member Sean Moloney said the group quickly grew after a founding member visited the festival on a camping trip.

Twelve made the trip for the event this year in search of victory after top results at previous festivals.

A Pumpkings member did not win the Great Australian Pumpkin Roll, but the group managed a win in the pumpkin pull.

The group was among hundreds of people who competed in the pumpkin roll.

Mr Moloney said it was not just the accolades which kept the group coming back each year.

"Everything. The atmosphere is ridiculous, it is just a fun weekend," he said.

Thousands of people flooded into Goomeri for the annual festival on Sunday, which celebrated its 20th anniversary this year. 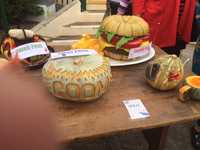 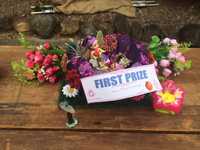