Get your Blues shoes ready for long-weekend escape

Get your Blues shoes ready for long-weekend escape

IT'S free and the line-up for this year's Blues on Broadbeach Festival will have you dancing on the Gold Coast streets to international and local performers.

The May 17 to 20 festival is in its 17th year and program director Mark Duckworth says it's still a favourite of older Australians.

"We have a big cross section of patrons, but we do find a lot of the older demographic come in for a holiday like a longer, extended stay," Mark said. "I think there is lot of people into the blues genre. It's that nostalgic sound. Even the newer acts still lean on those traditional early rock and roll, early blues sounds." 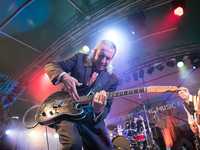 Blues on Broadbeach is a 'new age festival' where there is no mud, just lots of free street music to hear, see and dance to.

"You can pick your own holiday," Mark said. "You can choose to stay in a high-end hotel or with friends in the area, you can eat super fancy or you can eat takeaway on the fly. The precinct caters for everyone. I think seniors like that you can choose your own festival experience."

About 70 acts will perform across 20 performance areas including stages in Surf Parade, the Broadbeach Mall and Kurrawa Park.

Five-time Grammy Award winner and member of the Blues Hall of Fame, Robert Cray, will perform his only Queensland show at this year's festival. During the 90s his Cray Band featured in concert with artists such as Eric Clapton, the Rolling Stones, John Lee Hooker, BB King and Bonnie Raitt.

The Backsliders are another big act. "They are made up of a blues legend out of Sydney, Dom Turner, and the drummer Rob Hirst who als

For all event details, go to www.bluesonbroadbeach.com