WE FIRST experienced the Cinque Terre about 15 years ago. Back then we had not heard of the famous region on the Ligurian coast of Italy. We were staying in the nearby, pretty seaside town of Santa Margherita and were told to take a train to the Cinque Terre and see if we could walk between some of the villages.

The Cinque Terre, as you may know, means Five Lands or as we prefer to call them, five villages: Riomaggiore, Manarola, Corniglia, Vernazza and Monterosso. They have been built on the rugged cliffs overlooking the sea and appear to be clinging on to life, ready to tumble down into the Mediterranean Sea at any moment.

You travel between each township by train, boat or path; cars cannot get in.

Fifteen years ago, we walked the rough and craggy paths on the beautiful terraced hills between each village. We had no idea when we set out the difficulty or extent of the walk. Our intention had been to just walk to one, perhaps two of the villages, and then catch the train back to Santa Margherita.  But at each village, the astonishing beauty inspired us to go on to the next.

In each village, our aching feet were soothed as we sat in delightful cafes overlooking the clear blue sea, looking up to the multi-coloured buildings while we drank coffee, and as the day progressed, wine and then, later, cocktails.

We would ask the waiters: "Is it far to the next village?" and the reply was "no, not really".

But that was a lie. Perhaps not so much far, but rather steep and tricky.

The paths along the cliffs sometimes ascended to dizzy heights, and then descended dramatically, often with just dirt steps dug into the hills. It was a difficult walk. But we were 15 years younger and the scenery was so ridiculously spectacular we kept going.

We revisited this UNESCO World Heritage site this month in a manner more suited to our mature years. By ferry.

We drove to La Spezia, an easy hour's drive from our base in Lucca in Tuscany, bought out tickets (55 euros each, quite expensive) for a day trip which could take us to Riomaggiore, Manarola, Vernazza and Monterosso if we wanted to stop in each village. Corniglia, sadly, was no longer an option, closed due to floods and mudslides in 2011.

"Let's be sensible and stop in just a couple of the villages," we said to each other. "Otherwise we will run out of time, you know how we like to linger in cafes."

The approach to each village is a stunning highlight: the soaring cliffs, the multi-hued buildings, the rocks, the clear colour of the sea.

The colourful buildings of Riomaggiore are huddled around a tiny port, where hundreds of tourists fight to get photos without anyone in them (impossible). We walked the cobbled streets and wondered, as everyone does, who owned all these small and pretty boats? People were sunbathing, diving and jumping into the water, swimming, and who were we not to join them?

Then it was back on the ferry with hundreds of others, squeezed into seats up on the top deck, the wind and sunshine and views enchanting all of us.

We stopped off at the next village, Vernazza, just in time for lunch.

We'd been told to climb to the very top of the cliffs for a special seafood restaurant, not a tourist haven like most of the others around the harbour. It was difficult, but we could see jaunty umbrellas poking from the rocks high in the sky and we kept going, and then going. It was like climbing a rocky ladder, but it was obviously going to be very special.

"No, unfortunately, we are full," a waiter told us as we finally arrived, gasping and panting. The disappointment was palpable. But we had stopped earlier to swim off the port with its old and handsome wall, and it was so joyful to be in the cool, clean water, we could not have regrets about missing out on a lunch table, even if it would have been like sitting up in heaven looking down.

Back down the rocky steps we climbed, found a touristy restaurant right on the beach front, decided it would have to do, and we secured a table at the very front just as a couple left.

Touristy it might have been, but it could not have been better for a close-up view of all the activity in the water, the rocks and in the surrounds.

"Glad we missed out on the terrace lunch spot in the sky," I said as a small boat puttered into the walled harbour with four attractive young men on board, all shirtless. I assumed they were locals and said "hot Italian guys coming in without shirts," to my old (not so hot but still good) Aussie guy and we watched as they slowly made their way into shore and tied up the boat, put on their shirts, and stepped ashore for lunch.

Visiting the Cinque Terre in summer or even in shoulder season (it shuts down in the winter) will always mean large crowds - it is one of the world's most popular tourist attractions! But it's worth it.

I think is the best way to see it is by ferry (you have the sea trip as a bonus) but train is very efficient. Unless you are super fit and have good knees, don't think about walking the path.

Whichever way you decide, just go. It is an experience to be treasured. 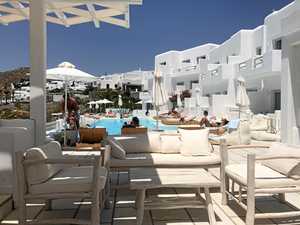 10 things to love about the Greek Islands 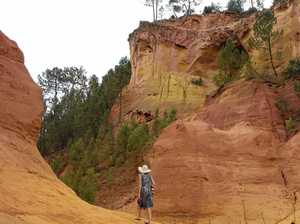 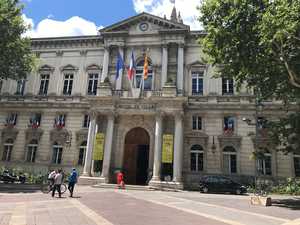 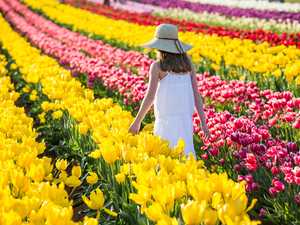 Amalfi Coast: A beautiful but hard slog of a holiday Diving into nostalgia on the Amalfi Coast