UPDATE 12.30pm: MAYOR Mark Jamieson says any wins along the way are welcome in his bid for re-election.

Cr Jamieson is in the midst of a four-way battle for the position as leader of the Sunshine Coast, and was clearly ahead of the pack after the results of the Daily's You Decide election debate exit polling were revealed.

"I never take anything for granted and the most important poll will be on Saturday, or all week at the pre-polls," Cr Jamieson said.

"Any encouragement along the way is welcome."

University of the Sunshine Coast political lecturer Bronwyn Stevens wondered the less politically engaged would be keeping track of the local elections, given the plethora of candidates.

"Name recognition will be very important, except of course if it's negative recognition," she said.

She said she expected Cr Jamieson to retain his seat, and believed there was still more of an inclination at a local level towards voters granting a second-term to hopefuls- more so than we'd seen at a state and federal level of late.

EXCLUSIVE: MARK Jamieson will leave his competitors for dead and continue his reign as Sunshine Coast Council mayor, according to exit polling conducted at Sunshine Coast Daily You Decide election debates.

In his three forum appearances ahead of the March 19 local government elections, the incumbent clearly impressed audiences but the make-up of his new council is not quite so clear.

In the Sunshine Coast council area, in at least four out of the 10 divisions, exit polling saw fewer than five votes between the top two candidates.

In total at least 2000 people attended the eight meet-the-candidate forums held across the Sunshine Coast and Noosa in the past three weeks.

Each attendee was asked after the event to fill out an exit poll to indicate which candidate, in their opinion, performed the best.

In the Noosa Shire Council area, reports were received that candidates and their supporters had tampered with the ballot and cast dozens of extra votes.

Due to these reports, the Daily will not be releasing the results of the poll in that local government area.

In the Noosa mayoral quest, it's widely tipped to be a two-horse race between current councillors Tony Wellington and Sandy Bolton, with Ray Kelly a long way behind.

At the packed You Decide forum held at Noosa Christian Outreach Church at the beginning of the month, both candidates brought an army of fans, complete with branded t-shirts.

Their tilt at mayoralty will leave two council seats vacant and with some high-calibre candidates in that field, it could go down to the wire with some sitting councillors undoubtedly feeling a nip at their heels.

In the south the Sunshine Coast Council forums were done division by division, with the mayoral candidates invited to events in Caloundra, Maroochydore and Buderim.

Cr Jamieson's weakest result was at the Caloundra Events Centre forum, where observers commented on his hostile response to questions.

But he still pulled a convincing 63.75% of the vote. His closest competitor, Greens' candidate Tony Gibson, achieved 20%, followed by Conondale's Ron Green - who failed to answer most questions - on 10% and lastly Alison Barry-Jones on 6.25%.

Will Mark Jamieson be re-elected as Sunshine Coast mayor?

This is not a scientific poll. The results reflect only the opinions of those who chose to participate.

Cr Jamieson gained even more ground at the Maroochydore RSL forum where he appeared more relaxed and took home 67% of the vote. He was trailed by Mr Gibson who had 19% of the vote, then Ms Barry-Jones with 11% and Ron Green with 3%.

Finally, the current mayor reached a crescendo at Wises Rd Baptist Church attracting a whopping 72% on the vote. Remarkably, Mr Green, picked up second place with 12%, followed by Mr Gibson on 11% and Ms Barry-Jones with 5%.

Working our way through the divisions, divisions one, six, eight and nine were the safest for sitting councillors Rick Baberowski, Christian Dickson, Jason O'Pray and Steve Robinson respectively.

The previously uncontested Division Two had new candidate Matt McIntyre hot on the heels of sitting councillor and long-time local Tim Dwyer, with the vote split 47.5% to 52.5% respectively.

The Division Three race is still wide open and preferences may come into play here in the real count.

However on the night, former councillor Andrew Champion came out on top with our audience with 37% of the vote, followed closely by environment department lawyer Steve Barclay who attracted 33% of the vote. Current councillor Peter Cox received 23%.

Council employee Geoff Peters led the charge in the Division Four debate receiving 31% of the vote. He was followed by John Hutchinson who took 26%. Preferences will be important in the real life decider in this division, which features a field of seven candidates and no sitting councillor due to former deputy mayor Chris Thompson's retirement.

Councillor Jenny McKay held her own in two Division Five debates but she was tag-teamed by Yvonne Dalziel and Greens' candidate Sue Etheridge. Ms Dalziel demonstrated a good knowledge of local issues, strong opinion and didn't mince her words. Her performance saw her take the lead on the sitting councillor, winning 46% of the vote compared to Cr McKay's 29%. Cr McKay's record as sitting councillor could see that result change in the actual vote.

In Division Seven sitting councillor Ted Hungerford managed to peel away from the pack to grab 39% of the vote, but Cam Young was hot on his heels with 36%.

Finally, in Division 10 Councillor Greg Rogerson picked up 38%, but was followed by Lenore Pople on 23% and Mike Strano on 21%. 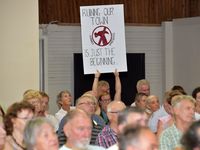 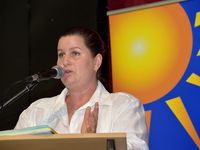 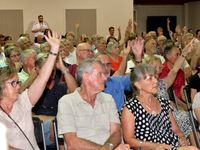 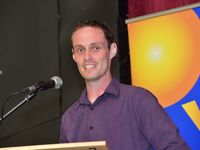 The results of these polls do not attempt to predict the results of the election, only to give an insight into the candidates' performance on the night. The demographic of attendees at the events was an older one of highly-engaged voters, and therefore doesn't represent the broader community. On the night of each of the forums, candidates were all invited to deliver a short speech before answering pre-submitted reader questions. Some debate amongst candidates was allowed. The format at the Buderim event was different with candidates delivering a prepared speech then answering some questions from the floor.