A FINE innings has been laid to rest.

Ellem passed away three years short of his ton - something he achieved 43 times on the cricket field.

Often referred to as the Bradman of the North Coast, he will mostly be remembered for his cricket achievements. A genuine all-rounder, his highest score was 193. His best bowling figures were 14 for 19 (8/5 and 6/14) in a match for Clarence River against Lower Clarence in 1948.

"Aged 16, he bowled a maiden over to Bill O'Reilly at Fisher Park," son Dennis Ellem noted in the eulogy.

"He captained the NSW Combined Catholic side in 1946, realising his ambition to play at the SCG, and scored 69 runs in 61 minutes.

"He was without doubt one of the best all-rounders to come out of the Clarence Valley.

"He did Grafton proud." 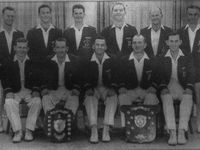 Ellem was admired not only for his cricket ability, but for how he conducted himself as a captain, and in life.

"Russell was a perfectionist. No matter what he did, he gave 100%."

As a schoolboy, he received the most sporting blues by an individual in the history of Grafton High School for sports including cricket, tennis, rugby league and athletics.

He was also an accomplished lawn bowler, winning numerous club, district and zone championships for Grafton District Services Club and Grafton City Bowling Club in the '70s and '80s. He played off a golf handicap of six.

"He came to our presentation every year and was a great inspiration for us all. I think last year was the first one he missed in as long as I can remember.

"All the Westlawn players are going to miss his stories on cricket and life. He always had a story for us about his fantastic cricket experiences, including playing against touring England sides, and the war."

Ellem married Terry (Teresa) Morrissey - who he met at his first dance - in 1942; a union of married bliss which would last 69 years until Terry passed away peacefully at their Matheson St home on February 9, 2012.

On January 5, 1943 he enlisted in the Second World War and served in New Guinea. But despite numerous applications for a more active role Ellem was kept there 'because he was such a good cricketer'. He was discharged on April 3, 1946.

Ellem was also an active sports administrator, on various cricket committees between 1934 and 1951, the inaugural secretary of Grafton Men's Hockey Association and foundation club captain of Byron Bay Golf Club.

One of his most cherished hobbies, tending to his roses and vegetable garden, which helped keep him active well into his nineties.

It was a long life, well lived. May Russell Ellem rest in peace.