Human aren't the only animals on this planet that like to show-up their mates.

Seems dolphins also get into the act.

A pod of the frisky mammals was filmed trailing behind a boat off the coast of Mandurah in Western Australia.

But while some of the dolphins were content to just lazily cruise in the vessel's wake, others saw the opportunity to get their faces in the spotlight. 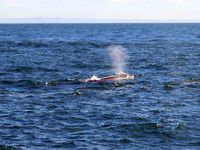 In the footage, the show offs burst out of the water and perform acrobatic flips and stunning somersaults to the "ooohs" and "aaahs" aboard the boat.

"They were surfing and launching in our cruise vessel's wake in Mandurah on Saturday afternoon," a spokeswoman for Mandurah Cruises said.

The show is a "common occurrence" for this time of the year with the peak of the mating season coinciding with the salmon run.