I'VE NEVER yearned to be young again. At every milestone age I have reached, I have been happy and am now content at an age that marks me at the top end of the baby boomers.

Content, that is, until I see something that makes me miss my teenage self!

In this case, a group of young boys, jumping of the rocks into the sea on Italy's Amalfi Coast.

I first saw them splashing about in the sea, boisterous, loud, laughing - as young boys all over the world surely are.

I watched them for a while as I stood on the small pebbled beach of Marina di Praia. It is called a beach but really, it's just a tiny wedge of pebbles, mighty uncomfortable on the feet, with a series of sun-lounges the enterprising café owner put out to collect money from tourists. While the 'beach' lacks sand and comfort, the sea is all-enticing - clear, green water that beckons in the heat of summer.

Marina di Praia is a rocky place, the surrounding cafes, restaurants and villas are built into the rocks and there are steps … always the steps on the Amalfi Coast!

As I watched the young boys with my husband, the sea became more choppy, rough even, and we decided to do what we always do in similar circumstances, head to the nearest bar where a glass of Prosecco or perhaps an Aperol Spritz would go down well as we watched the sea and the tiny pebbled beach.

As we walked up the high path clinging to the rocks, the young boys decided they would follow. When we reached the top, they climbed the small barrier separating us from a drop to the sea below and, yes, they began to jump into the water.

We watched, fascinated by their lithe bodies and their free spirits. These boys saw no danger in the waves crashing to the rocks below, no fear in the long drop to the water, no concerns that they may suffer an injury. All they saw was fun and adventure.

"How old are you?" I asked one of them after he had jumped several times into the water far below and was climbing up for another leap.

And then I envied him.

Oh, to be 17 again and to feel invincible. To enjoy the adrenaline kick of jumping high off rocks into the crashing sea below. To be able to surface quickly, climb up the rocks, scramble up the path and do it all over again. And again. And again.

It brought to mind my own invincible self at 17. There were no soaring cliffs or jutting rocks or roiling sea at my local swimming pool in Melbourne's western suburbs, but I did jump off the high diving board into the deep end of the pool. Over and over again. And again. And again.

I knew how those young Italian boys felt, and it was good to remember it, but not as good as now, at my perfect age, relaxing over my Aperol Spritz and enjoying the spectacle of it all. 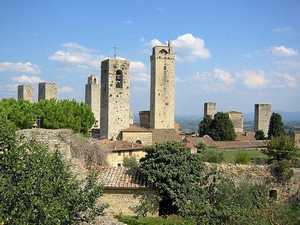 Ferry your time between the 'Five Lands'