by Lexie Cartwright and Matt Young
0
2

West Australian health authorities are scrambling after the state confirmed its fourth coronavirus case - a woman who attended a concert attended by hundreds of people last night.

Meanwhile, a man in Tasmania ignored pleas to self-isolate and instead worked several shifts at a major hotel before it was confirmed he had coronavirus.

There are now fears he spread the virus to hotel guests and staff.

It comes as an 82-year-old man died in a Sydney hospital in what is Australia's third COVID-19 death. It's reported he was from the same care home as the first NSW fatal victim.

The number of coronavirus cases in Australia has jumped yet again, with authorities in Victoria, New South Wales, Queensland, Tasmania and Western Australia confirming diagnoses today.

Two members of the Australian Defence Force have also contracted the virus.

The federal government is reportedly finalising a $5 billion economic stimulus package amid the outbreak.

NSW now has 38 cases, the highest in the country, with 488 cases under investigation.

The total number of coronavirus cases in Australia now stands at 79, with 38 in NSW, 15 in Queensland, 12 in Victoria, seven in South Australia, four in WA, two in Tasmania and one in Northern Territory. Three people have died, while 22 people have recovered, authorities said on Saturday.

WA Premier Mark McGowan confirmed late on Sunday that a fourth confirmed case of coronavirus had been detected.

The West Australian reports that the woman, aged in her 70s, was at a WA Symphony Orchestra performance last night attended by hundreds of people. An undated image of the West Australian Symphony Orchestra.Source:Supplied

The woman returned to Perth on the direct Qantas flight QF10 from London last Thursday. She had recently travelled to Cuba before spending six days in London.

She became ill on Friday and was tested for coronavirus, but still attended the concert last night before receiving her results. It's not clear whether she was told to self-isolate by doctors.

The WA Health Department is now racing to track down people who sat near her at the concert or on the flight.

"We will be tracing all the people on the plane ... for those ones who were two rows in front and two rows behind ... but we have certainly already requested those manifests," WA Chief Health Officer Andrew Robertson told The West Australian.

The woman is now self-isolating at home.

It has been reported that the 82-year-old man who died overnight was a resident of Baptist Care's Dorothy Henderson Lodge. The aged care facility in Macquarie Park, in the city's north, is the facility where the first person in NSW to die of coronavirus lived, according to The Daily Telegraph.

A 95-year-old who died on Tuesday was discovered to have been infected with the virus.

The man was hospitalised on 1 March with respiratory illness.

"I have just recently spoken with the family and shared my condolences. As you can imagine, this is an incredibly difficult time for the family and for us all," said Mr Low. Four further cases have emerged in NSW in the last 24 hours.

NSW Health said a female health care worker at Ryde Hospital had contracted COVID-19. Aged in her 30s, she is a contact of a previously confirmed case from an aged care facility. Ryde is in the same hot spot zone on Sydney's north shore as a clutch of other cases.

A female in her 50s, who is a contact of a previously confirmed case, has also been confirmed with the disease.

Overnight, a further two new NSW cases were confirmed. These included a man in his 60s, who recently returned from Italy and is currently under investigation, and a second man in his 40s who is a friend of a previously confirmed case.

The second man is a member of the ADF and travelled on return Sydney to Canberra flights on February 28. There is more information on this below. 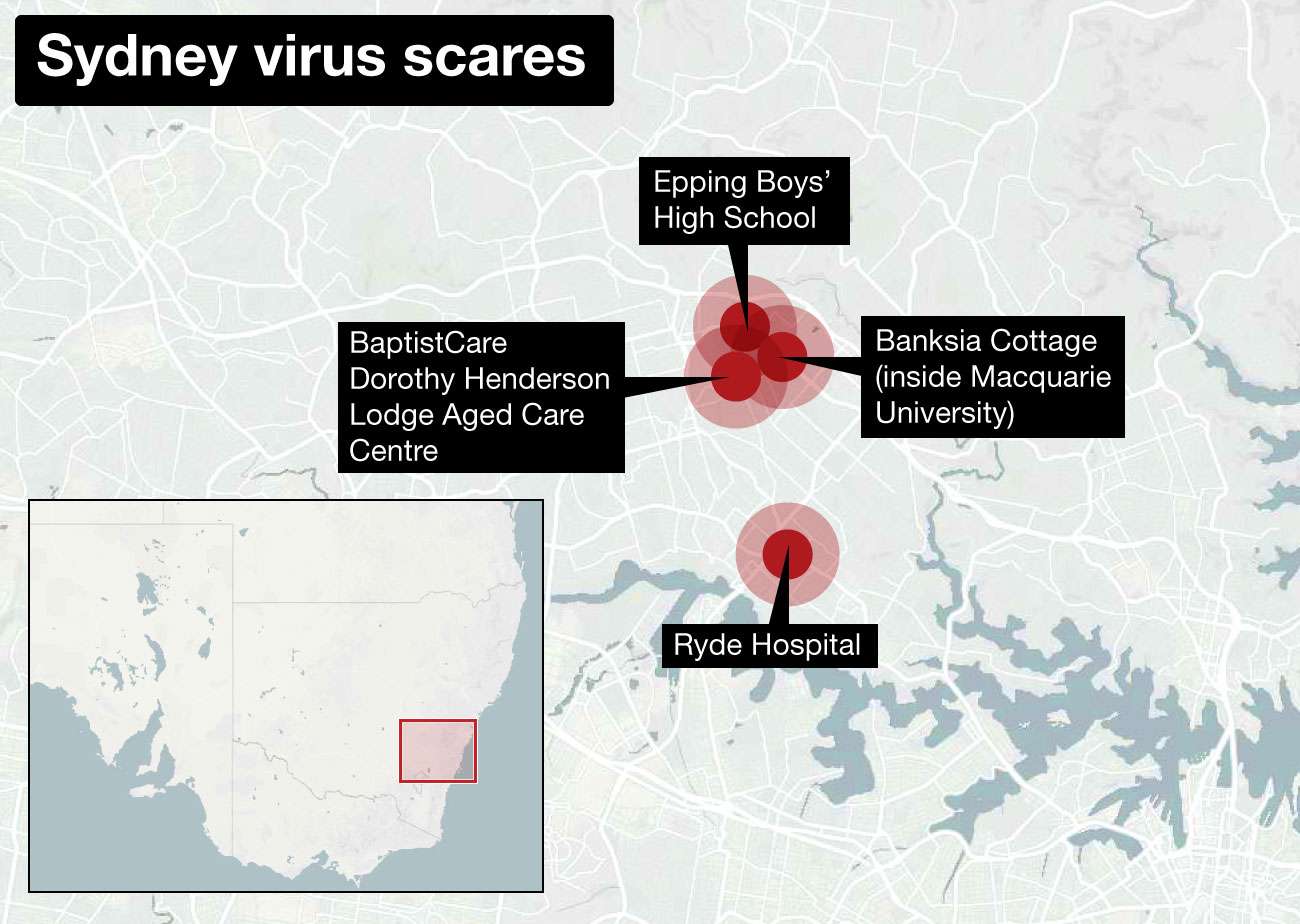 Nationally, the federal government is close to finalising a $5 billion economic stimulus package to attempt to mitigate the damage coronavirus has already caused.

The government is considering further reducing deeming rates for pensioners, providing all local councils with funding for small projects and expanding instant asset write-offs for businesses. It could be announced on Tuesday. Health authorities in Tasmania are in disbelief after it was revealed a man who was suspected of contracting coronavirus ignored pleas to stay at home and instead went to work in major hotel instead.

It's feared he could have spread COVID-19 to multiple staff and guests at the Grand Chancellor, Hobart's top hotel.

The man in his 20s arrived in Tasmania from Nepal via Singapore on February 26.

Tasmania's Public Health Services Mark Veitch said the man called a telephone helpline on March 6 after developing symptoms and was subsequently tested for coronavirus at the Royal Hobart Hospital that night.

He was advised to self isolate while the results were pending. However, he instead completed a shift at the Grand Chancellor hotel. In addition, he had worked several shifts the Hobart landmark last week.

"It's unacceptable for people to continue activities in public or attend work, while waiting for their test results and I ask people in Tasmania to act responsibly always in these circumstances," Dr Veitch said, reported the Mercury.

The case is different to that of Dr Chris Higgins in Melbourne as he was unaware he might have the virus when he saw up to 70 patients last week.

The man is now in isolation, as are his four flatmates and three friends. Authorities are now looking at his movements, including at Hobart's Ideal College.

The man is now Tasmania's second coronavirus case. A 40-yer-old man who had travelled from Iran to Tasmania remains in hospital in Launceston. 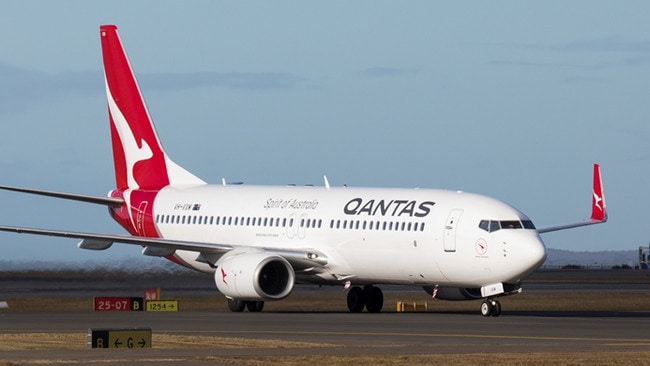 An ADF staff member who has now been diagnosed with coronavirus flew on Qantas and Virgin planes of February 28.Source:Supplied

On Sunday, the Australian Defence Force said two of its members had contracted coronavirus. The two personnel, and people who are known to have come into contact with them, are in self isolation.

The ADF has sad they are trying to trace anyone who may have come into contact with one of the officers who flew to a meeting at Defence Headquarters in the Canberra suburb of Russell on 28 February.

NSW Health are urgently trying to notify passengers on board two recent domestic Australian flights that the man, in his 40s, took while symptomatic. These flights are QF1509 Sydney to Canberra and VA651 Canberra to Sydney.

NSW Health is asking anyone seated in rows 2-6 in the first flight (Sydney to Canberra) or rows 3-7 in the second flight (Canberra to Sydney) to self-isolate and call their local public health unit for guidance.

"Defence is co-operating with NSW and ACT Health authorities to contact, isolate, test and support persons involved," the ADF said.

Authorities in Queensland said on Sunday that a woman from Gympie had been placed into isolation at the Sunshine Coast University Hospital. She is the state's 15th infection.

The 38-year-old had recently returned from London and Dubai, the Courier Mail reported.

The Victorian Department of Health confirmed a 12th case in the state today.

The Herald Sun has reported an Indonesian visitor who crossed Australia before seeking medical help last week. The woman arrived in Perth on February 27 from Jakarta. She developed symptoms in Perth but flew to Melbourne before the severity of her illness led her to see a GP.

She flew on Virgin Australia flight VA682 from Perth to Melbourne on March 2 and then saw a GP on Friday, 6 March.

Meanwhile, the doctor in Victoria who was diagnosed with coronavirus after treating up to 70 patients has been identified as Australian musician Missy Higgins' father.

Dr Chris Higgins as the Melbourne doctor from the Toorak Clinic, who is at the centre of new reports after he was confirmed to have the potentially deadly virus last night.

It was reported he had treated at least 70 patients at his clinic and saw two others at a nursing home. 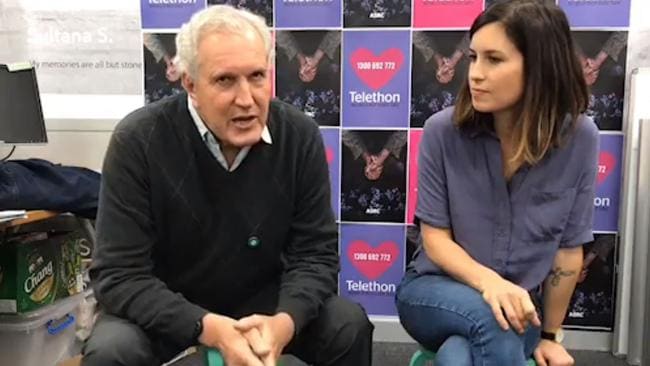 Mr Higgins addressed the report on Facebook, replying on a virus update posted by Victorian health minister Jenny Mikakos, who told the media today she was "flabbergasted" he returned to work. She did not directly name him.

Mr Higgins said he didn't imagine "for one moment" he had coronavirus.

Victorian Health authorities have been in touch with those who came in contact with him, urging them to self isolate for 14 days.

Victoria is responding to a "likely pandemic" by opening four specialised coronavirus testing clinics on Saturday, at the Royal Melbourne Hospital, The Alfred hospital and The Austin and at Box Hill Hospital.

"In recent weeks I have been advising the community about our health system preparedness as we gear up for what is a likely pandemic," Victorian Health Minister Jenny Mikakos said.

"We do expect we will have a significant increase in demand as this virus spreads in the community."

There have been 3000 coronavirus tests in Victoria and more than 2500 negative results.