Surprised coffee drinkers at Aroma's café-restaurant nearly dropped their cups when soprano Fran Wilson, suitably uniformed as a waitress, suddenly burst forth with the first few bars of the famous work from Handel's "Messiah."

She was then quickly accompanied by choirmaster Adrian King and 40 singers from the Chorale who streamed in from Hastings Street or stood up from their tables.

Handel's "Messiah" is a much-loved oratorio and its "Hallelujah Chorus" in churches and concert halls in the weeks before Christmas is as traditional as turkey and plum pudding or oysters and prawns, depending on your preference.

The fact is, however, that George Frideric Handel composed it in 1741 as a lead up to Easter so it was appropriate for the Chorale to select it for its "flash mob."

The choir has a long-standing association with the Noosa Long Weekend Festival of the Arts and the singers wanted to do something to help launch the 10-day festival which starts on July 15. Tickets are now on sale.

A "flash mob" is a group of people who appear suddenly in a public place, perform some brief action and then disperse and the Chorale's impromptu performance was hugely applauded by patrons.

"What a wonderful way to appreciate Easter and celebrate this special holiday," Frank Bish, from Brisbane, said.

Visitor from Germany, 18-year-old Nils Lowhagen has listened to "The Hallelujah Chorus" in church and hearing it as he sat down for coffee was a "nice surprise."

For Brisbane's Mark Strambi it was "fantastic. What a lovely way to start the day" and for wife Ann "the whole coffee shop bursting into song was quite surreal."

Noosa Long Weekend festival director Ian Mackellar said the Chorale had sung at the first Long Weekend in 2002 and other years and, as an old friend and cultural partner, had offered to promote the festival.

"The singers this morning were brilliant. This impromptu performance just adds to the overall sense of excitement and the community spirit of the festival which is celebrating its 15th anniversary this year." 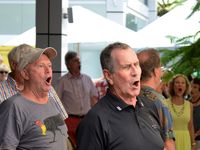