Carnival set to blossom with fresh faces and events

Carnival set to blossom with fresh faces and events

YOU may think you've seen it all if you've been present for many of Toowoomba's 68 prior Carnivals of Flowers, but somehow organisers always seem to come up with something new.

At the recent launch of the 69th carnival, at which the first of 176,030 seedlings and bulbs were planted in the Botanic Gardens at Queens Park, Mayor Paul Antonio referred to it as "a breathtaking 10 days of flowers, flavours and sounds".

New to this year's event, which runs from Friday, September 21 to Sunday, September 30 is the Night Garden, with floral and lighting displays and experiences, to be held over five nights in Queens Park from September 26.

Also new, the Chef's Brunch, featuring one of two special guest chefs at the carnival, Julia Busuttil Nishimura, will be held in the leafy gardens of Gip's Restaurant.

The other guest chef is Adam Liaw, author, cook, host of Destination Flavour and winner of Masterchef Australia 2010.

When it comes to garden experts, you can't get much bigger than multi-award-winning garden designer, author and commentator Jim Fogarty, who has more than 30 internationally recognised design awards and 15 gold medals.

And on the entertainment front, there's quite a bit for the older generation, with The Dusty Springfield Show, The Church and Choir Boys among other entertainers, including Swing on This, presenting a collection of classic and more modern swing songs reworked with a contemporary style. 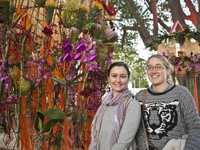 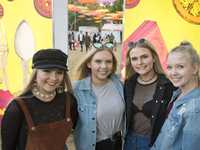 There's five months of work ahead for Toowoomba region's horticulturalists and gardeners, readying for more than a quarter of million visitors from September 21, but local contemporary artist Anna Bartlett, has been secretly working with them to capture in paint exactly what Queens Park will look like in full bloom.

Her artwork will hang in City Hall until it is auctioned at the Qantas Gala Dinner on Thursday, September 20 under the stars in Laurel Bank Park, beginning the 10 days of celebration, which have won gold for best festival and event at the Australian Tourism awards for the past two years.

To find out more go to www.tcof.com.au.