NYE Down Under: Burns from fireworks, weapons, drunks

NYE Down Under: Burns from fireworks, weapons, drunks

Pamela Frost Journalist Pam has been at the Daily Mercury since March 2013 and has also worked as a journalist in Batemans Bay and Wellington both in NSW. And yes, that does make her a Blues supporter. Growing up she moved around different places including Sydney, Moree, Wollongong and lived for about two years as a high school student on a small island in Micronesia called Pohnpei. Pam loves water sports, including SCUBA diving, snorkelling and kayaking but her awful balance means she’ll never touch a surf board. Ever...
Full Profile
0

Most state authorities said they were pleased with the behaviour of Australians celebrating New Year's Eve, despite hundreds of people being arrested for various offences.

In New South Wales more than a million people packed into the Sydney CBD to watch the fireworks and police said about 30 were arrested; half of them for drug-related offences.

Another man was arrested and charged with public mischief after an alleged hoax bomb threat.

In a separate incident, a police officer was hit in the head with a bottle.

In Queensland, despite bigger than usual crowds at New Year's Eve events, police said there were fewer arrests than last year.

There were 536 arrests across the state, mostly for public nuisance and drug-related offences. Police said this was about 100 down on last year's tally.

A total of 231 street and alcohol infringement notices were issued in Queensland.

"I think that is a great start to 2016 but unfortunately there were some who ignored the warnings and risked their lives and lives of others by driving while drunk or under the influence of illegal drugs," Queensland police minister Bill Byrne said.

In Victoria 126 people were arrested as part of New Year's Eve celebrations, including 65 people for being drunk in a public place.

Two men were in a critical condition after separate falls and two others were burnt by illegal fireworks.

One man received head and pelvis injuries after he fell from a balcony and another man received a head injury after jumping from a pier and landing on sand.

Only two people were arrested in Melbourne CBD, including one for being drunk in a public place.

In total there were 62 reported assaults and 16 drink-driving offences from more than 5400 breath tests. 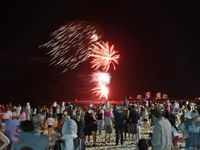 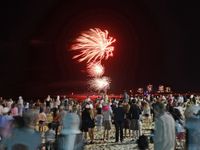 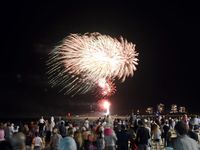 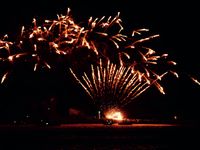 Police said more than 50 incidents were caused by illegal fireworks.

In South Australia, police said they were pleased with behaviour of crowds throughout the state but said there were 75 arrests and 196 notices were issued for offences including drugs and consuming alcohol in a dry zone.

Police said many young people were arrested, including a 14-year-old who was in possession of home-made weapons.

There were also reports of a stabbing that left one man in hospital.