UPDATE, 4PM: A 60-year-old Gold Coast man is in hospital following a light aircraft crash in South Grafton this afternoon.

"It is not known whether the crash was caused by mechanical fault or human error."

The man had head injuries and was taken to Grafton Base Hospital for observations. 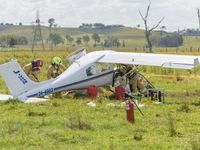 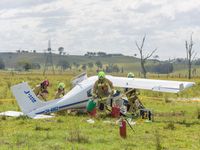 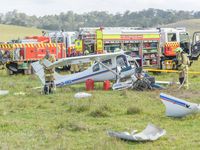 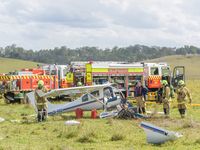 UPDATE, 3PM: Authorities have cordoned off the area of a light aircraft accident to a suspected fuel leak.

Police, ambulance, fire and SES crews all attended the scene, with an ambulance vehicle departing at low speed a short time ago.

It is understood the accident occurred about 400m from Southampton Road, near South Grafton Aerodrome.

A Grafton Police spokesperson confirmed police were attending the scene of a light aircraft accident.

"A plane has crashed at South Grafton Aerodrome shortly after takeoff," the spokesperson said.

"A couple of people have been injured and are being treated by ambulance."